This engraved granite stone is located by a maple tree in the Mayor’s Grove of Beacon Hill Park. Mayor’s Grove is located in the north part of the park, between Arbutus Drive and Heywood Street, adjacent to the playing field. As indicated in the partial transcription included below, the tree was planted to honour the visit to Victoria of King George VI and Queen Elizabeth in May 1939. 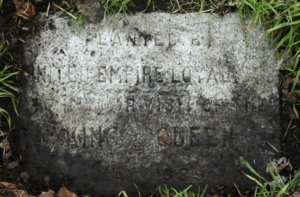 In 1939, with War clouds gathering, they welcomed King George VI and Queen Elizabeth on their cross-Canada tour by having a designated spot under a banner on the Parade route and by planting a maple tree in the Mayor’s Grove in Beacon Hill Park. At the dedication ceremony, May 29th, the members gathered around the tree and the Program began with the singing of “O Canada.” Mr. Tabor, the President, made his remarks and “The Maple Leaf Forever” was sung. A dedication prayer by Rev. McLean, the Chaplain, followed. The members dedicated the tree by touching it in turn, then formed a circle around it. In conclusion, “God Save the King” was sung. The tree with its plaque at the base is still thriving in the Park.

“It has been brought to light that in 1939, during the visit to Victoria of King George VI and Queen Elizabeth, a tree was planted in Beacon Hill Park by the Victoria Branch, to honour the visit. It was decided to locate this tree and to refurbish the commemorating plaque.”

– From the Loyalist Gazette Spring 1967 – Branching Out – Victoria Branch. 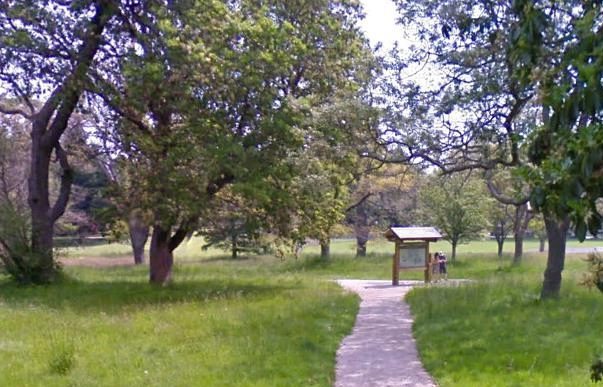 On Tuesday 22 July 2014, British Columbia’s Lt.Gov. Judith Guichon unveiled a new plaque to marking the centennial of UELAC and the 75th commemoration of the 1939 royal visit to Canada. The commemorative stone, donated by the Victoria Branch of the United Empire Loyalists’ Association of Canada, was placed in the Mayor’s Grove at Beacon Hill Park. 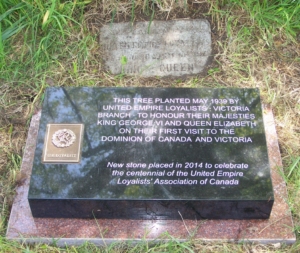