On the south-east side of the Marché Bonsecours building, near the corner of Rue Bonsecours and Rue de la Commune in Old Montreal, a marble plaque referring to Sir Wm. Johnson and Sir John Johnson was installed in the mid-nineteenth century by the Antiquarian and Numismatic Society of Montreal. It reads:

Sir William Johnson
Of Johnson Hall on the Mohawk River
The celebrated Superintendent on Indian
Affairs & first American Baronet commanded
the Indian Allies with Amherst’s Army in 1760
To them was issued in commemoration
the first British Montreal Medal
Here stood the house of his son
Sir John Johnson, Indian Commissionner
S. d’A & N” 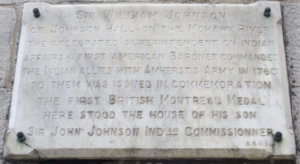 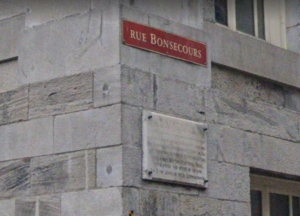 The marble plaque in its original location

On the north-east side of the building, also facing Rue Bonsecours near the corner of Rue Saint-Paul E, is a bronze plaque marking the residence of Sir John Johnson. Erected by the former Commission des Monuments historiques in some year between 1924 and 1968, it reads:

Here stood the Palace of
the Intendant built in 1698,
replaced by the manor of
the Baron de Longueuil, then by the
residence of Sir John Johnson,
by the luxurious Mansion
House Hotel, the Theatre Royal, and the
British American Hotel. 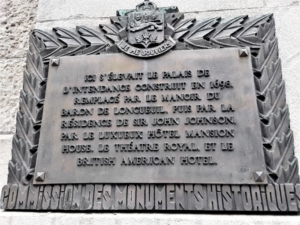 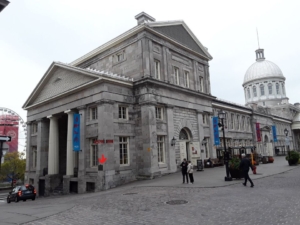 Before you visit the site, you might also read The Bonsecours Market And Montreal: From One Era To The Next.