At the Annual Meting in February, Major W. H. Hunt reported that the arrangements were completed for the erection by the Winnipeg Branch of a Bronze Plaque in our Manitoba Legislature Building by the entrance to the Archives. The plaque, 27″ x 30″, will carry the 1789 Order-in-Council, No. 25, that provided for the “U.E.” Mark of Distinction with additional wording by a committee consisting of Major Hunt, Chairman and Prof. S. N. Rowse, Mr. C. G. Lyon, and the President, Mrs. S. J. Sametz.

At the March meeting, Major Hunt reported that the Plaque was now in the Legislative Building and that it would be erected by the Architect. The cost of the plaque was $400.00. 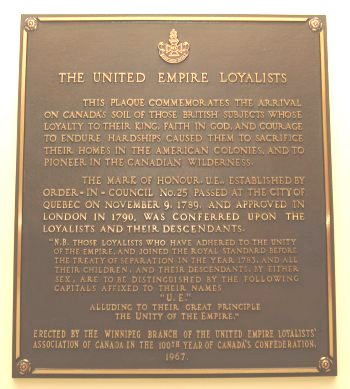 Address given by the Lieutenant-Governor of Manitoba, Mr. R. S. Bowles, on the occasion of the Plaque unveiling at the Provincial Legislature by the Winnipeg Branch, UEL Association:

The Winnipeg Branch of the U.E.L. Association placed a bronze plaque in the Manitoba Legislative Building, Winnipeg, as a memorial to their ancestors who sacrificed their homes in the American Colonies to pioneer as British subjects in the Canadian wilderness. The date chosen for the unveiling ceremony came close to the same time in the month of May, 17893 when the first arrivals came from New York to the mouth of the St. John River to found the province of New Brunswick.

The Branch President, Mrs. S. J. Sametz, briefly outlined the purposes of the Association which resulted in the erection of the plaque, and His Honour Richard S. Bowles, The Patron of the Winnipeg Branch, congratulated the members for their efforts and expressed his great pleasure in unveiling such a worth project. The Branch Secretary, Mr. C. G. Lyon then read messages of congratulations from other branches across Canada, including greetings from the two most recently organized branches in Quebec and in Prescott.

A letter read from Mr. Duff Roblin of Edmonton and a telegram of congratulations from Miss Bessie Choate of the Vancouver Branch concluded with the timely warning: ” Never was there more need for loyalty and appreciation of historical tradition than now.” A message of greeting and congratulation was also read from the newly elected National President, Dr. J.G. Dillane; while at the same time appreciation was expressed for the devoted services of our retiring president, Mr. E., J. Chard, and especially for his valuable advice in connection with the memorial plaque. The great debt of gratitude of the branch was extended to Major W. H. Hunt, whose untiring efforts made the erection of the plaque possible.

The inscription of the Plaque is as follows:

THE UNITED EMPIRE LOYALISTS
THIS PLAQUE COMMEMORATES THE ARRIVAL
ON CANADA’S SOIL OF THOSE BRITISH SUBJECTS WHOSE
LOYALTY TO THEIR KING, FIATH IN GOD, AND COURAGE
TO ENDURE HARDSHIPS CAUSED THEM TO SACRIFICE
THEIR HOMES IN THE AMERICAN COLONIES, AND TO
PIONEER IN THE CANADIAN WILDERNESS.

THE MARK OF HONOUR, U.E., ESTABLISHED BY
ORDER-IN –COUNCIL NO. 25 PASSED AT THE CITY OF
QUEBEC ON NOVEMBER 9, 1789, AND APPROVED IN
LONDON IN 1790, WAS CONFERRED UPON THE
LOYALISTS AND THEIR DESCENDANTS.

“N.B. THOSE LOYALISTS WHO HAVE ADHERED TO THE UNITY
OF THE EMPIRE, AND JOINED THE ROYAL STANDARD BEFORE
THE TREATY OF SEPARATION IN THE YEAR 1783, AND ALL
THEIR CHILDREN, AND THEIR DESCENDANTS, BY EITHER
SEX, ARE TO BE DISTINGUISHED Y THE FOLLOWING
CAPITALS AFFIXED TO THEIR NAMES.
“U.E.’
ALLUDING TO THEIR GREAT PRINCIPLE
THE UNITY OF THE EMPIRE.”

ERECTED BY THE WINNIPEG BRANCH OF THE UNITED EMPIRE LOYALISTS’
ASSOCIAION OF CANDA IN THE 100 YEAR OF CANADA’S CONFEDERATION.
1967