Restoration of the UEL Monument 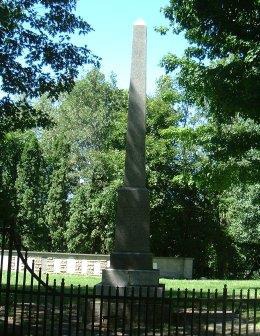 Monument to the United Empire Loyalists

The Monument to the United Empire Loyalists is the oldest monument to the Loyalists in Canada. It is located in the United Empire Loyalist Heritage Centre and Park, situated along the historic Loyalist Parkway in Adolphustown, Ontario. It was erected in the old Loyalist Cemetery, established shortly after the first Loyalists to Ontario landed on this site on June 16, 1784. The cemetery contains the graves of many early Loyalists, but unfortunately most of the early burials were unmarked. The monument is a tall granite obelisk mounted on three limestone bases, located just inside the entrance to the cemetery grounds. It was unveiled on June 16th, 1884 to honour the Centennial of the Loyalists in Ontario who landed at this site and established the cemetery.

Due to its age, the monument is listing and needs to be levelled. The original limestone bases have badly cracked and need to be entirely replaced in order to prevent further damages to this important monument. In addition, the flagstone walkway, installed in 1956, shows signs of heaving due to frost and tree roots, and in many areas poses a tripping hazard to any visitors into the cemetery grounds. This again poses insurance risks to visitors so the entire walkway must be removed and levelled.

The restoration and repairs to the UEL Monument is a joint project by the UEL Heritage Centre and Park and the Bay of Quinte Branch UEL with a planned completion date in 2014. The estimated cost to repair and replace the bases and the surrounding walkways is $35,000. Following discussion of the business plan presented at the UELAC Dominion Council in March 2013, it was agreed to support the project with $5000 from the Memorial Fund and an additional $10,000 from the Promotions Fund. To date, close to $20,000 of the cost has been pledged. The scope of this project is beyond the normal financial operations of both the UEL Heritage Centre and Park and Bay of Quinte Branch UEL. As such, we are seeking financial support from our members, various UEL branches, and other individuals, as well as other historic groups to support this important project.

Please help restore this important Loyalist monument. Your gift will help to preserve and support Loyalist History. All donations will be issued with a charitable receipt.

As many of you are aware, the 2014 branch project for Bay of Quinte was the repair and restoration of the UEL Monument in the cemetery at the UEL Heritage Centre and Park at Adolphustown. The repairs have been taking place this summer under the auspices of Campbell Monument in Belleville. The entire monument was dismantled and the broken original limestone bases (which literally fell to pieces during the work) were removed, a new cement base installed and the original three bases replaced by stronger Stanstead granite, matching the original. Once that was completed and the monument put back together, the paving stones were removed, cleaned, and replaced to create a gradual slope and eliminated the step and tripping hazards. The next phase of the project will be to repair the grass area surrounding the area. We still need to install the 4 cemetery stones previously removed from the grounds that were broken and have since been repaired.

Our Dominion President, Bonnie Schepers, Branch President Peter Johnson, and Ketcheson Family Association President Trevor Ketcheson, laid wreaths at the new base of the monument during the Ketcheson family reunion held at the park in Adolphustown on July 26th.

Mark your calendar. The official unveiling & re-dedication of the restored UEL Monument will take place as part of a re-enactment and re-dedication to be held on the weekend of May 23- 24, 2015.

We would like to thank the various individuals, UELAC Branches across Canada, and the UELAC for their generous donations towards this worthy project. Donations can still be made towards the final stages of the restoration; a charitable receipt will be issued – Registered Charity No 889 242 863 Rr00001.

Please make cheques payable to “UEL Heritage Centre and Park” and mail to:

Now that the Monument and walkway has been restored, there are plans to have an official re-dedication of the Monument. The date for that will be the afternoon of Sunday May 24th, 2015. It will be part of a weekend of activities on May 23-24 that also includes the 200th Anniversary of the end of the War of 1812. The original Glengarry Fencibles, who took part in several actions during the War of 1812 were stationed in Adolphustown during the spring of 1815 until they were disbanded in Kingston. The weekend will host an encampment by various re-enactors and will conclude with a ceremony in the cemetery on Sunday afternoon. Various political dignitaries and UEL executive members will be invited, along with other individuals and groups that helped to finance this restoration project. A plaque will be unveiled at the ceremony to commemorate the restoration.

Additional information has come in on potential burials that have no known marker in the cemetery. We hope to have paving stones placed along the original cemetery walkway, similar to those used in the “Ad Astra” walkway at the National Air Force Museum of Canada in Trenton, Ontario. That way, families can erect a stone in memory of their loyalist ancestors. It is hoped that we can create an annual event in the cemetery to mark unveiling of new memorial paving stones.