The Colonel John Butler (Niagara) Branch has undertaken a project to identify and designate those smaller cemeteries in the Niagara Region that are the burial sites of Loyalists. The first cemetery designated was the Carl-Misener-Bald Cemetery along the Welland Canal in Port Robinson, Ontario. This one- acre Burying Ground was set aside by John Carl Senior UEL in 1798 to be under his direction or his heirs forever. After years of neglect, the 200 year old cemetery was restored by his heirs. On June 9, 2007, Heritage Thorold LACAC unveiled a plaque designating the cemetery as one of Cultural Heritage Value. 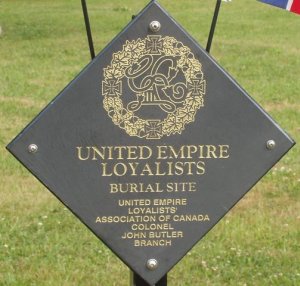 Colonel John Butler Branch also unveiled a plaque, which they erected in the cemetery. The plaque reads:

At the dedication, we were approached by the chairman of the St. Catharines Heritage Committee and the Thorold Heritage Committee inquiring if we would do the same for cemeteries in their areas. He also asked if we would consider cemeteries that had already been dedicated as those with Cultural Heritage Value. We are waiting to hear back from them. We generated a great deal of interest at the first dedication and hope to reap the benefits in the years to come.

It is the intention of the Branch to choose the smaller cemeteries in the area for designation. Input from members whose Loyalist ancestors are buried in these cemeteries has been positive. One such cemetery is the Warner Cemetery which has avoided closure over the years due to widening of the QEW. Letters have been sent to Churches /Municipalities involved explaining the Project and asking for permission to erect a plaque.

The plaque’s lettering and crest are carved into a piece of slate 12 inches square which is attached to a 12 square piece of metal plate 3/16 of an inch thick. Then, gold paint is applied to the carved out area. In time the gold paint will fade but the carved surface will remain for many years. The metal backing and the slate are bolted to a 2 inch square steel post and cemented in the ground. The top of the plaque is about 48 inch above ground level.

We are recording the date when the plaque was erected in each cemetery along with the name or names of Loyalists buried there. There will be directions on how to find the cemetery. This directory will in time be made available to members and the interested public.

Our goal is to mark all the cemeteries in the Niagara area where Loyalists are buried, thereby leaving a Loyalist legacy for future generations.