Loyalist Day was celebrated in a big way in Cornwall, Ontario. The Recreated King’s Royal Regiment of New York, Trinity (Bishop Strachan Memorial) Anglican Church and Sir Guy Carleton and St. Lawrence Branches joined together in a church service and in a ceremony to dedicate a new tombstone to honour the memory of Loyalist Jeremiah French.

Lieutenant Jeremiah French was born at Stratford, Connecticut July 8, 1743 and died at Maple Grove, Ontario December 5, 1820. He was the son of Jeremiah French Senior and Hannah Edwards. In 1762 he married Elizabeth Wheeler who was born December 14, 1745 and died July 14, 1838. He settled at Manchester, Vermont, then known as the New Hampshire Grants, in 1764. Here he was a town clerk, a select man and a constable for the Town of Manchester.

At the beginning of the American Revolution he remained loyal to the Crown and enlisted in the Queen’s Loyal Rangers, July 5, 1777. His lands in Manchester, Vermont were confiscated and he was put on a list of proscribed people. 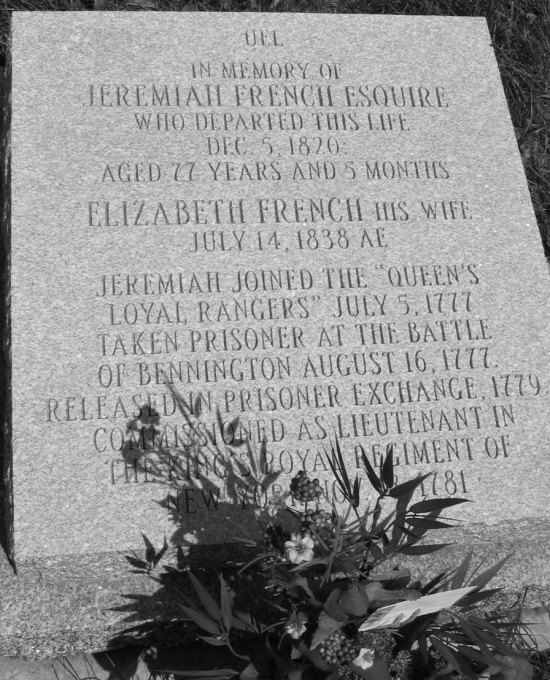 The tombstone (photo by Ed Kipp)

Jeremiah French fought at the Battle of Bennington and was taken prisoner August 16, 1777. Captain Justus Sherwood arranged a prisoner exchange in 1779. He resigned his commission in the Queen’s Loyal Rangers after facing charges of corruption of which he was cleared. He joined the Second Battalion of the King’s Royal Regiment of New York as a Lieutenant, November 18, 1781. After the conflict was over, he received a 2400 acre Loyalist grant at Maple Grove near Cornwall, Ontario.

Jeremiah French was the first Member of the First Ontario Legislature for Stormont and one of the founders of Trinity Anglican Church. He was appointed a magistrate for the Eastern District in Upper Canada (Ontario) in 1792. He built a house on his grant at Maple Grove and his son-in-law George Robertson later added to it. His house was moved to Upper Canada Village during the construction of the Seaway. Today it is known as the Robertson House since the management of the Village has de-emphasized the Village’s Loyalist heritage.

Jeremiah French donated the property for the original Maple Grove Cemetery to the Trinity Anglican Church. The graveyard was relocated to its present site along the south side of Vincent Massey Drive during the Seaway construction. Maple Grove Cemetery is the only cemetery along the Seaway which had all its graves moved intact. Jeremiah French, his wife Elizabeth Wheeler and many of his Loyalist descendants are interred there.

The Yorkers march in
(photo by Graeme Miltimore)

Here is how this project evolved. Last summer Shaun Wallace searched Maple Grove Cemetery and found the original marker for Jeremiah French lying in pieces half buried in the ground. Previously Merle and Diana French had uncovered it. Shaun approached Gavin Watt, Commander of the KRRNY and Carol Goddard, President of St. Lawrence Branch and asked for their support for this project. He then asked George Anderson if he would back the restoration. George, Shaun, Carol and Captain Michael Eamer formed a committee. Shaun represented and coordinated activities with the Yorkers. George worked with Archdeacon Ross Moulton of Trinity Anglican Church and Sylvia Powers of Sir Guy Carleton Branch. Carol Goddard and Captain Michael Eamer represented St. Lawrence Branch. The restoration, church service and the dedication resulted.

June 19, 2005, Loyalist Day in Cornwall commenced with a church service at Trinity Anglican Church. The Recreated King’s Royal Regiment of New York paraded into the church. Archdeacon Ross Moulton welcomed the Loyalists and theYorkers to this historic Loyalist church. Margaret Hall, Vice President, Central East Region and Kerstine Szederkenyi, a fifth great grand daughter of Jeremiah French did readings. Archdeacon Moulton gave a poignant sermon in which he compared the plight of the Biblical Hagar to that of the Loyalists. After the service, the guests enjoyed a hearty luncheon before proceeding to Maple Grove Cemetery for the dedication.

Newspaper accounts indicated that about 150 people attended the church service and the ceremony. The dedication began with the Royal Yorkers in both their green and red uniforms parading the colours into the cemetery. Carol Goddard, President of St. Lawrence Branch welcomed the assembled people. Sylvia Powers, Past President of Sir Guy Carleton Branch was the co host. Sylvia’s husband Bill is a descendant of Sarah French, a sister of Jeremiah French. Guy Lauzon, the Member of Parliament for Stormont and Dundas brought greetings from the federal government and spoke about the significance of preserving cemeteries. The Provincial Member for Stormont, Dundas and Charlottenburgh, Jim Brownell spoke on preserving local history.

The gravestone is unveiled (photo by Graeme Miltimore)

Janet Anderson, a member of Sir Guy Carleton and St. Lawrence Branches on behalf of George Anderson, a descendant of Jeremiah French, acknowledged and thanked all the people who came to the event, some from many miles away, and the many others who helped with the project.

The Yorkers saluted and Sylvia Powers read the inscription on the new monument. Duncan MacDonald played Amazing Grace on the Pipes while those present were invited to view the graves of other Loyalists buried at Maple Grove. Other known Loyalists buried in the cemetery are Arthur Flaro, Albert French, Michael Hartle and Jacob Van Dusen. 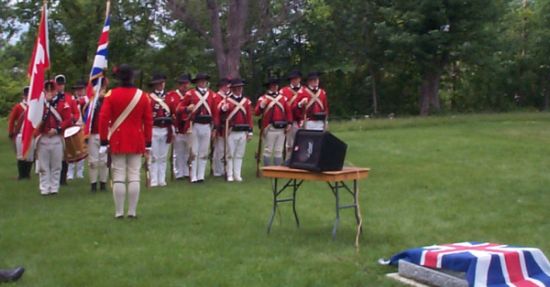 The Yorkers at attention (photo by Graeme Miltimore)

Descendants of Lieutenant Jeremiah French from across North America will gather at Maple Grove Cemetery in Cornwall for the dedication of a new tombstone in his memory Sunday, June 19th, 2:00 p.m.

French, a member of one of Cornwall’s founding families, represented Stormont in the first Ontario Legislature, between 1792 to 1796. Arriving in Cornwall in 1784, he settled at Maple Grove west of the city. . He was a respected business man and a leading member of the community, serving as a magistrate for the Eastern District in Upper Canada (Ontario), and a founding member of Trinity Memorial Church on Second Street. French’s home (the French-Robertson House) now forms part of Upper Canada Village, having been moved there during the St. Lawrence Seaway.

Event organizers are George Anderson of Nepean, a descendant of Jeremiah French, and Shaun Wallace, president of the Morrisburg and District Historical Society. Both are members of St. Lawrence Branch United Empire Loyalist Association. Wallace is a member of the King’s Royal Regiment of New York (KRRNY) re enactment group. Costumed reenactors from the KRNNY will be taking part in the dedication ceremony at Maple Grove Cemetery. French served with the Queen’s Loyal Rangers and the KRRNY on the British side during the American Revolution. William French, of Houston, Texas, president of the French Family Association is among those planning to attend. French family descendants from California and Western Canada will also be present.

In addition to the dedication ceremony at Maple Grove Cemetery, which will form part of Loyalist Day celebrations sponsored by St. Lawrence Branch members, visitors are invited to join parishioners during the morning service at Trinity Memorial Church. Related genealogical and historical displays will be set up in the church hall Anderson states that the original Jeremiah French tombstone will be placed on permanent loan with the S.D. & G. Military Museum at the Cornwall Armouries.

On Saturday, June 18, special celebrations involving the KRRNY reenactors will be held at the Johnson Manor House in Williamstown. As part of the Williamstown activities the unit will retire its colours to the Nor’Wester and Loyalist Museum.

The St. Lawrence Branch serves members who reside in the area east of Prescott and south of Ottawa, or members who have an interest in that geographic area where their Loyalist ancestors may have settled. The Branch represents the Loyalist history and heritage to the community in that area.

About the United Empire Loyalist Association of Canada

Incorporated in 1914, the UELAC is made up of members from round the world but who belong to one or more of 28 branches across Canada from coast to coast. The mandate of the Association is to enrich the lives of Canadians through knowledge of the past, in particular the history of the United Empire Loyalists and their contribution to the development of Canada. From an influx of some 40 – 50,000 Loyalist refugees during and immediately following the American Revolution, about one in ten Canadians, or about 3 million, can claim Loyalist ancestry today, as can maybe half that number who reside elsewhere in the world.