St. Lawrence Branch member Mabel MacLean made it her personal project for 2004 to have a tombstone erected in Salem Cemetery, Summerstown — one of the oldest cemeteries in the county — for John Cameron, UE, her third-great-grandfather, who died on Sept 10, 1803. Cameron’s grave marker having long since worn away, it was time, 200 years after his death, to replace it. The unveiling took place on August 7, 2004, and was combined with a ceremony honouring six other loyalists and American Revolution veterans buried in the cemetery. It was a beautiful summer day, and the skirl of bagpipes played by Shawn White of the Glengarry Pine Band welcomed over 100 friends and relatives to the event in true Glengarry tradition. 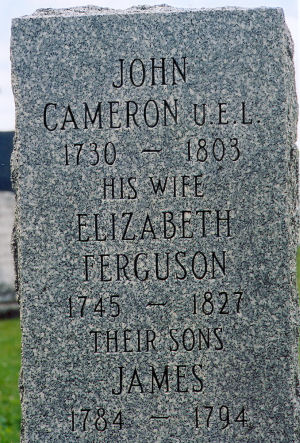 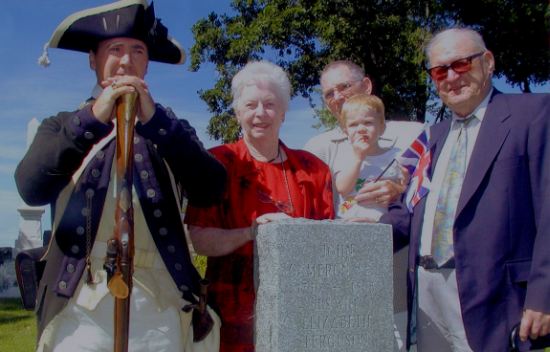 John Cameron was born on May 10, 1730, in Rannoch, Scotland. Details about his birth and childhood are few and uncertain. He married Catherine Seaton, who died soon thereafter, possibly while bringing their son, Donald, into the world in 1768. Cameron remarried, and in 1773 he and his new wife, Elizabeth Ferguson, and their two daughters, Anne and Eizabeth, emigrated to the British colony in America. He served in the King’s Royal Regiment from 1777-1783 during the American Revolution, and after it was disbanded on Christmas Eve, 1783, he drew West ½ lot 17, concession 1, Charlottenburgh, as his Loyalist grant. Coincidentally, Mabel MacLean has lived on a part of that lot for nearly 60 years.

The Salem Cemetery’s stone wall, built by Loyalists more than 200 years ago

During the ceremony, UEL flags (the Royal Union Flag, designed in 1606 and used by England and Scotland as their royal standard from 1707 until 1801) were placed on the graves of the six veterans. Shaun Wallace, a member of the recreated King’s Royal Regiment New York, discussed his costume and the regiment, and Lancaster Branch Chaplain William Ellis outlined the history of the KRRNY, in which the Loyalists fought. John Cameron’s tombstone was unveiled by the youngest and oldest people present — Mabel’s two-year-old great-nephew, Cameron Davidson, and 90-year-old Kenneth Cameron, who like Mabel is a third-great-grandchild of John Cameron’s. Chaplain Ellis then ended the ceremony by dedicating the tombstone with a heritage prayer. 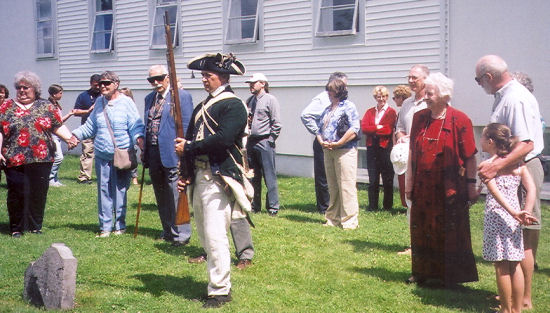 The unveiling ceremony at Salem Cemetery