In July 2004, Bill Terry, a member of the Grand River Branch executive, was named chair of the newly formed Branch Projects 2014 Committee. He was charged with keeping in touch with the Branches regarding their planned projects to raise public awareness of the Loyalists and their contributions in each region.

The first cemetery in the Long Point Settlement to see the erection of a “UEL Burial Ground” marker was Woodhouse United Cemetery. 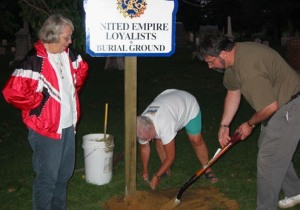 At the second cemetery, Old Windham Cemetery (Culver Cemetery), the staff were so pleased with the concept and the sign that they supplied the posts themselves, and erected the marker in a prominent location. The press was contacted, and the result was a front-page story (with photo) about the project in the Simcoe Reformer. 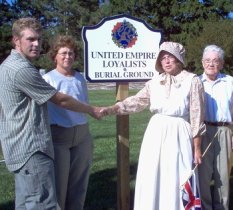 The third and final marker for the year 2005 was placed in Vittoria Baptist Cemetery. The cemetery’s caretakers were impressed with the sign and expressed their pleasure at having been chosen to be a part of this project. The three signs were completed and placed by the end of the summer, 2005. 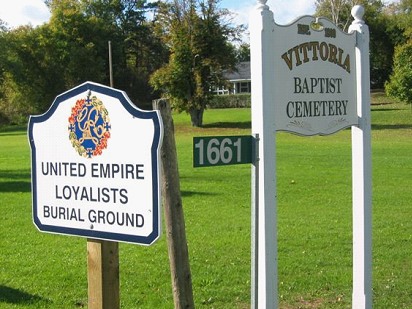 It is the plan of Grand River Branch to continue to honour the Loyalists who are buried in our region, by placing signs on cemeteries in Brant, Oxford, Elgin to areas north of Guelph as well as Haldimand. In 2006, with new applications being submitted, it may be possible to get more than three cemeteries done, now that the cost of the Crest design is no longer an issue.

“The signs have been well received and have brought about considerable feedback in that they have caught the attention of many people. They seem to be having the effect hoped for when the project was conceived,” says Bill Terry.