In 2004 the long-anticipated Loyalist Programme finally took place at Kingsville Historical Park’s Charlie Campbell Museum. Bicentennial Branch members Mary Hutchins U.E. and Kimberly Hurst U.E. created an amazing Educational Project for the Grade 7 students of Essex and Kent Counties in South Western Ontario. Mary died January 9, 2004 and this project was named in her honour, recognizing her for all her contributions to the Bicentennial Branch and the UELAC. 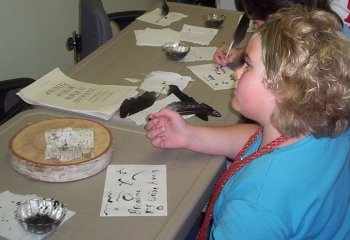 Excitement filled the air as the students arrived. They were anxious to get started and thrilled at the opportunity to take part in this fledgling project. The project was presented to two classes in two days and the students were enthusiastic and appreciative.

The students were shown a twenty-minute slide presentation, demonstrating what life was like for the Loyalists before the outbreak of the Revolutionary War. This presentation touched upon such things as what their homes may have looked like and showed the different social and economic classes and the various nationalities of the Loyalists. It took them along the Loyalists’ journey to various parts of British North America and showed the students what it was like to arrive in such wilderness conditions, having to start all over with nothing but what they could carry with them. 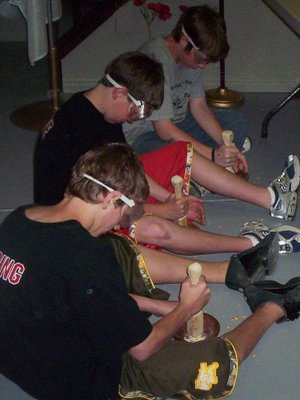 Following the presentation the students were invited to participate in six interactive displays in small groups. They were encouraged to make rope, wash and rinse clothing, grind corn into cornmeal, see how they would have hunted for their food and protected their families with a musket demonstration, practiced writing with a quill and they all learned how to use a two-man saw.

Each student left with a better understanding of what the Loyalists had endured and realized what an important contribution these refugees made to Canada as a whole. 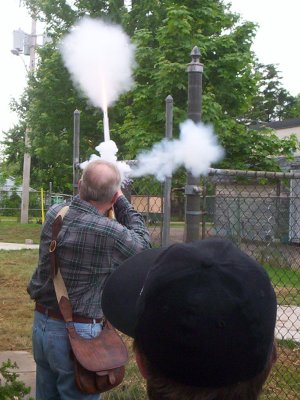 On the 26th and 28th of April 2005 we had our first two classes of the year join us from Kingsville Public School. Both days were very successful and we all enjoyed our time there with the students. I would personally like to thank Susan Hutchins, Bill and Tilly McAgy, Linda Iler, Christine Rawlins, Linda Lynch, Bob McCracken and Stuart Cruickshank for all their hard work and dedication to this Programme. These students took away a real understanding of how hard it was to come to complete and utter wilderness and start all over again. They were really excited about what they had learned and gained an appreciation for the Loyalists and early settlers of this country. 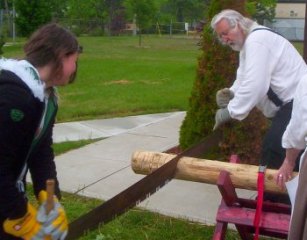 As of August 2005, Bicentennial Branch UELAC has a permanent Loyalist display at the Kingsville Historical Park, 145 Division St. S., Kingsville, Ontario. The display includes a framed full-sized reproduction of the original sheepskin Wigle family land grant and a new Loyalist flag and flag stand. Other artifacts are being added as they become available.