This page is one example of the content being developed by the Col. John Butler Branch in their project: Crown Grants of Loyalists and the Early Settlers Along the Niagara River Parkway.

On October 24, 1798 William Burn(s) received a Crown grant of 200 acres for Lot 14, Con. 1, as well as the Broken Front, in Willoughby Township. Little is known of William Burn or Burns. From “The Mark of Honour”, we find that William Burn was a young sheep farmer and agent to the Earl of Lord Selkirk. Selkirk had been granted land in Upper Canada between Lake Erie and Lake Huron in the townships of Dover and Chatham. Here, he planned a national Gaelic-speaking settlement of Highlanders. His personal farm, situated on Lake St. Clair in the centre of the colony, was to be its mainstay, and according the “Plan and undertakings” for the settlement, sheep were to be considered the “staple article upon which the profit will depend.” William Burn and Alexander Brown with the help of two dogs had driven a flock of 400 sheep, Spanish Merino rams sent from Scotland and ewes collected along the way, throughout the breadth of New York State. At Queens Town Selkirk found his flock ” in very good order having taken about a month to travel from Albany.” He met with countrymen Robert Hamilton and Thomas Clark, before embarking in a schooner on November 20 for York.

Before leaving York for Lower Canada on January 4, Lord Selkirk apparently left instruction that Chisholm was to be supplied with a horse. An “Account of Wm. Burn for Sundries for Lord Selkirk to Thomas Clark” shows an entry on January 7, 1804 of ” a horse to Mr. Chisholm…40 Dollars- 16 Pounds.”

The land near Baldoon, near modern Wallaceburg, was low and swampy, and many of the early Scot settlers contracted malaria and some died. William Burn died on September 15, 1804 before a doctor arrived from Detroit.1

An original Indenture in the Willoughby Museum indicates that Henry Huber purchased Lot 14 from Burn on 29 June, 1802 for 375 pounds, even though Benjamin Bowman was living on the property.

Henry Sr. and family had land in Wainfleet in 1803 and later his son John resided there. Henry Sr. died on June 1, 1811. (Hoovers Through the Ages: His Story by Howard J. Hoover…in Thorold Library)

Jacob Miller Sr. and his wife Barbara Hershey had come to Canada from Lancaster County, Pennsylvania in the United States in the late 1790’s and settled first at Lyon’s Creek. Jacob Miller Sr., son of Michael Miller, was born on February 21, 1772 in the United States of German heritage. His wife, Barbara, born 21 July, 1771 in Hagerstown, Maryland, was the daughter of Bishop Benjamin Hershey and Catherine Landis. She was the sister to Benjamin Jr., Abraham, and Christian. Jacob purchased Lot 10, Con. 6, 100 acres and Lot 12, Con.7, 100 acres in Willoughby from Peter Boughner. In 1804 Jacob Miller Sr. made a deal with Benjamin Bowman to exchange these two properties and money for Lot 14, Con.1 on the Niagara River.2

Jacob and Barbara lived first in the small log house that was present on this property. At the time there was only a tow path along the bank of the Niagara River. Six years later they built a larger log house that remained standing for 102 years. It was torn down in 1912 for the widening of the new Parkway Road at which time the Parks Commission purchased property to widen the road to 80 feet. A newer brick house was built on the same site but further back on the property.3

Jacob Miller became one of the local preachers, became a Bishop, and traveled on horseback to preach in Waterloo County. It is said that he belonged to the church of the United Brethren in Pennsylvania which at that time was distinctly German. When he came to Canada he continued in the Mennonite Faith. As a result they were not required to do military service. He also preached in a stone schoolhouse at Clarence, New York in a building that became known as “The Miller Church”. When the first church in Willoughby Township was built in 1824 on the River Road, about two miles south of his farm on the Jacob Gonder farm, he became the Preacher. He baptized his converts in the Niagara River.4

Jacob and Barbara raised a family of two sons and three daughters in their log home on the Niagara River. Sara arrived in 1794. Born in Hagerstown, she married firstly Benjamin Shoup, son of Christian Shoup and Eve Morningstar. After his death she married David Waggoner. David, born in 1800 married Eve Shoup, brother to Benjamin. In 1805 Jacob Jr. was born. He married Susanna Fares, daughter of William Fares. Elizabeth came next and married Jake Foreman. Magdalena was the youngest and she married a Maiden.5

In 1866 during the Fenian Raids the house sheltered many soldiers.(Calendar 1982)

Lot 14 remained in the Miller family for 180 years. After the deaths of Jacob Sr. on August 3, 1841 and his wife Barbara on August 10, 1841, it passed into the hands of Jacob Miller Jr. and then to his son William Fares Miller. In 1915 William left the property to his children, William Fermin Miller and Zettie May Miller. On her death in 1984, Zettie left the land to Albert and Candace (Lapp) Thwaites.

Zettie May Miller was extremely proud of her heritage and donated many of the family treasures and documents to the Willoughby Historical Museum where they may be viewed. 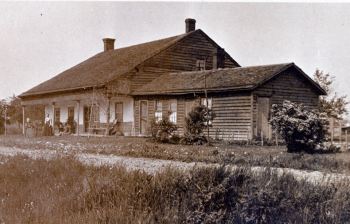 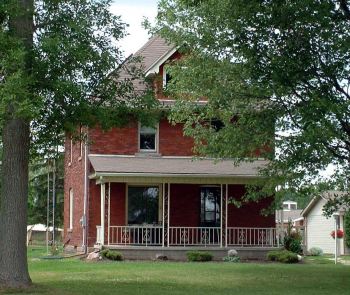 Miller House built in 1910
Photographed by Gail Woodruff in 2004

2. Notes by James W. Morris in the Willoughby Historical Museum.

3. Notes by Zettie May Miller in the Willoughby Historical Museum.

5. Notes by Zettie May Miller in the Willoughby Historical Museum.

→ Back to the Butler Branch Parkway Project