In the summer of 2007, UELAC stepped forward to support the work of the Black Loyalist Heritage Society in Birchtown, Nova Scotia. They had acquired St. Paul’s Anglican Church as part of their heritage site. Built in 1905, the church closed in 1989 and was officially de-consecrated on May 6th, 2007 by Bishop Fred Hiltz. As part of the restoration, Cliff Armsworthy of Stained Glass Garden removed the windows for repair so they could withstand the elements for another 100 years. In order to finance this project, the Black Loyalist Heritage Society sought sponsors who would donate the $400.00 required to restore each window, and offered to mark each restored window with a donor plaque. 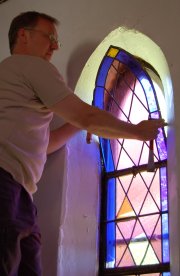 Following the UELAC annual meeting in June 2007, an appeal was made to UELAC members to support the preservation of the windows. The proceeds from the 2007 sale of the Black Loyalist daylily developed by The Potting Shed were used as the first contribution. Thanks to the generosity of the Vancouver Branch as well as several UELAC members, an additional $1500.00 was raised. Total donations of $1739.00 covered the restoration of four windows and the remaining $139.00 was assigned to the general fund-raising account of the Black Loyalist Heritage Society. Donor plaques will recognize the UELAC, Vancouver Branch and two private members. 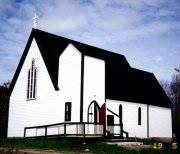 The Black Loyalist Heritage Society is very appreciative of our support.