May 2005 — William Secord Servos died on January 21, 1862 and was buried on his own land. Land records show that his property was originally part of a one hundred acre Crown Land grant made to Thomas Butler, second son of Colonel John Butler. Servos acquired the land on December 10, 1858.

William’s lone grave, once surrounded by orchards and now on private property in an industrial park, is unique in that it has survived over the years in part due to the iron fence erected around the grave and to its location – the farm eventually became part of the Happy Rolph Bird Sanctuary. 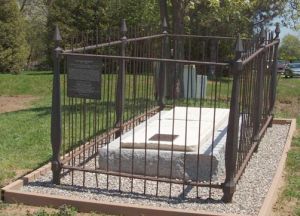 The broken tombstone was taken from the grave several years ago and stored to avoid further damage. 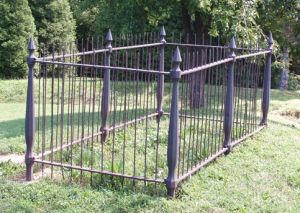 The restoration of the grave was accomplished with the foresight and assistance of several interested people, businesses and the Colonel John Butler Branch and supported by articles in the St. Catharines Standard. The grave site was restored and the old stone was cleaned and mounted on a granite slab and placed back inside the fence. The company which now owns the land on which the grave is located provided financial support and a commitment to maintain the grave. 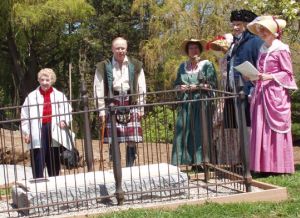 Although we were not able to trace William’s family line with any certainty – he died a bachelor leaving all his land to his niece – we do know that many of the Secords and Servos’ who settled in this area were Loyalists and William could well be related to them. A service of rededication of the grave, led by Noreen Stapley UE, was held on May 18, 2005 with members of the branch and the public in attendance. The unveiling of the plaques marking the grave was followed by the Loyalists’ Prayer.

As a result of the article in the July 1, 2005 issue of Loyalist Trails [containing the information above] regarding the restoration of the grave of William Secord Servos, William’s family has been found! Jack Peltier, UE, of Calgary, a Servos descendant, made the contact and then, with clues provided from William’s will, the connection. Mary Servos, William’s niece who inherited his property and goods, is the daughter of William’s brother Robert Franklin Servos. Robert was one of the witnesses to the will. As well, George Washington Servos, an Executor, is also a nephew of William. Other names mentioned in the will are also familiar to the Servos family.