Transforming a piece of cow pasture into a Pioneer Cemetery worthy of a Loyalist family — that was the challenge faced by the Colonel Edward Jessup Branch UE as they pursued their goal of honouring not only the Loyalists but their grave sites. 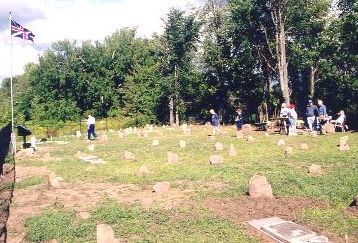 In the fall of 2003, as a 2014 project, volunteers began the process of restoring the cemetery where Loyalist Benoni Wiltse, his family and neighbours were buried. After countless hours of hard work and scrounging for materials and money, the cemetery was fenced and levelled, the few grave stones that had been found in the grass and under ground were in their proper places, the field stones which had marked some of the 200 to 300 burials were standing in rows and the United Empire Loyalist flag flew proudly over head. Plaques telling the story of the cemetery, the Wiltse family and those contributing to the restoration were also erected.

On 2 October, 2004 a Dedication Service was held, attended by Bernice Flett and Marg Hall representing the UELAC, which had contributed generously to the 2014 project; representatives of the Township of Athens which had made access possible; many Wiltse descendants both from a distance and local and interested residents of the area.

The guest book continues to be signed throughout the winter and spring. The site will be welcoming visitors on 28 May 2005 during Ontario’s Doors Open.