On January 11, 2009, Canada Post released a set of five new stamps as part of their series of Flags Over Canada.

“Since the images are printed at such a small size, we pay extra attention to emphasizing each mill’s defining attributes,” said designer Michael Kirlew of Gottschalk+Ash International.

The design team selected their photos based on a number of criteria.

“We asked ourselves: Do the surroundings in the image help to identify the location of the mill? Do the images work well with the position of the flag in relation to the type? And would each work as a single stamp, while complementing the others in a set?” The stamps are all set in an early summer setting. “When dealing with an ongoing stamp series like this one, having a unified colour palette is very important,” explains Kirlew. “We typically try to make the foliage, water and skies resemble one another, while at the same time keeping the personality of each location intact.”

The old mills selected were Watson’s Mill in Manotick ON; Keremeos Grist Mill, a 40-minute drive south of the city of Penticton BC; Old Stone Mill in Delta ON; Riordon Grist Mill in Village Acadien, Caraquet NB; and the Cornell Mill in Stanbridge East PQ. 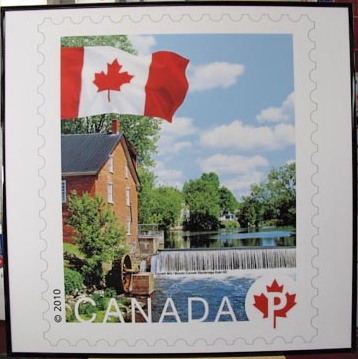 The last one, Cornell Mill, will be of particular interest to members of UELAC. Built on the banks of the Pike River in 1830 by Zebulon Cornell, this mill stayed in the family until its closure in 1963. In 1964, the Missisquoi Historical Society purchased the mill and established the Missisquoi Museum. The three exhibition floors of the Cornell Mill building depict community life, historic milestones and remembrances of this region ever since its opening to settlement in 1794.

One of the most recent Loyalist-related donations to this Museum was recorded in The Loyalist Gazette Vol. XLVII, No 1 2009. In November 2008, Heritage Branch presented the Grange Loyalist Chair to Heather Darch, Curator/conservator of the Missisquoi Museum and member of the Sir John Johnson Centennial Branch. (The event was also documented in Loyalist Trails.) Another key artefact is the red coat of Hendrik Ten Eyck who settled in Dunham c1795. 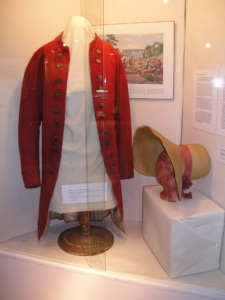 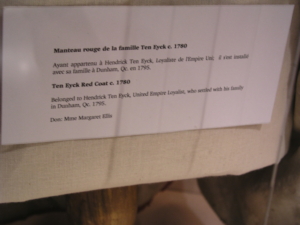 Another good reason to visit the Missisquoi Museum would be to see first hand the original stone marker of the Sir John Johnson Burial Vault. Following the destruction of the vault in the late 50’s, the stone was discovered by property owner Romuald Meunier in 1966. By June 1971 it had been donated to the museum by the Sir John Johnson Centennial Branch, installed in an outside wall of the museum and completed with a with a bronze plaque and a planting of Loyalist roses.

The stone bears the barely-legible inscription:
“Sacred to the memory of the Honourable Sir John Johnson who departed this life on the 4th Jan. 1830, aged 88 years”. 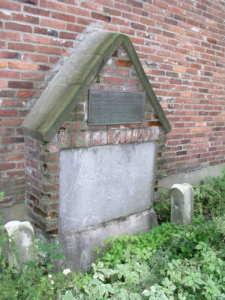 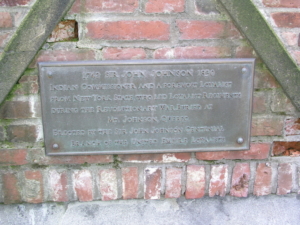 Each time you use the Cornell Mill stamp, you can reflect on the support given to the Sir John Johnson Branch, UELAC and Loyalist heritage by the Missisquoi Museum of Stanbridge East, Quebec.