For the second year, Grand River Branch has been actively engaged in marking the burial places of Loyalist Ancestors in the Grand River Region. Largely through the work of Marilyn Haslinger and Cathy Thompson we have been able to erect plaques throughout the area.

The Branch has already applied for a 2007 grant from Dominion and we are continuing to look for cemeteries where Loyalist Ancestors are buried. It is anticipated that as we erect more plaques that there will be fewer Loyalists in each cemetery, however it is certainly the goal of the Branch to erect as many plaques as there are cemeteries with Loyalists buried in them. 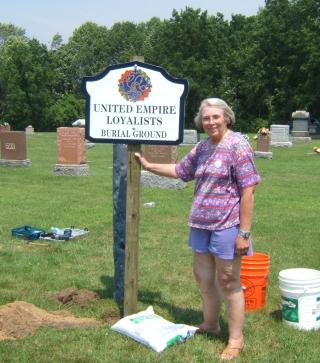 Cemeteries with Plaques for 2006: 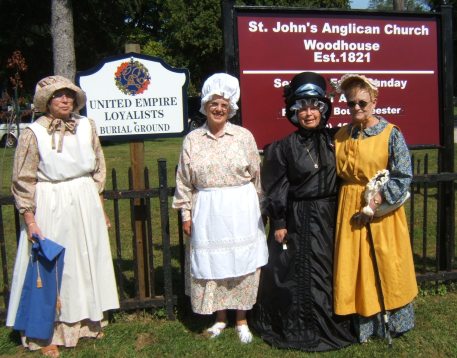 In the summer of 2005, Grand River Branch posted permanent signs at three cemeteries identifying them as Loyalist burial grounds.

The signs are 24″x30″ and have a white background with a border of royal blue; top centre there is a 9″ crest of the Royal Cypher. Beneath in Royal Blue is the lettering “UNITED EMPIRE LOYALISTS BURIAL GROUND” (pictured above).

There has been a great deal of positive comment from last year’s project, and the signs are available. As a result, we plans to post additional signs in other parts of the Branch territory.

After careful research and with the help of Ray Lewis’s UELAC project “Loyalist Burial Sites,” we have identified three more cemeteries in which UE Loyalists are buried and are ready to erect signs at St John’s Woodhouse and Doan’s Hollow Cemeteries in Norfolk County and Oakland Pioneer Cemetery in Brant County. We are currently working to identify at least three others they could complete over the summer.

We continue to investigate further, in order to place our signs as an ongoing project at other Loyalist Burial Grounds in the Long Point Settlement and along the Grand River. You may wish to think about this idea for your own Branch; perhaps we can cover Ontario with Loyalist burial signs. We have secured a grant from the Branch Projects Committee toward this project; perhaps you could apply for one too!